Did you know that when the Rules of Golf differ for match play and stroke play, they almost always refer to the Rules of match play first? This is because the earliest form of golf was match play!

Match play is a format where a player competes directly against an opponent on a hole-by-hole basis. Most of the differences in how the Rules apply in match play and stroke play are because of one fundamental difference between the two formats: in match play, the players in the match can protect their own rights and interests, whereas in stroke play, the Rules need to protect the interests of all players in the field. In match play, the only two people who have an interest in how the Rules apply are involved in the match and can advocate for themselves throughout the round.

With all that in mind, let’s dive into the details! 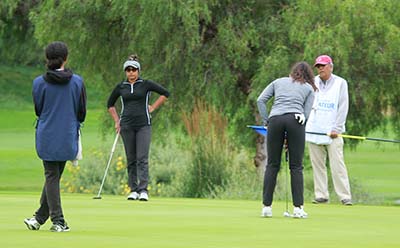 Match play is the only form of play where the term opponent is used. An opponent is the person the player is playing against in a match.

Match play can be thought of as a series of one-hole competitions, each resulting in one of three possible outcomes: win, lose, or tie. A player can win a hole by completing the hole in fewer strokes than his or her opponent. If the player and the opponent complete the hole in the same number of strokes, the players have tied the hole (also known as halved). The match is won when a player is winning by more holes than there are left to be played. For example, if the player is up by four holes, and there are only three holes left to play, the player has won the match. The players in this match do not have to play the remaining holes, as there is no way for the opponent to win the match with only three holes left. Of course, match play can also be played with handicaps where net scores would be compared on each hole.

If the match is tied after the final hole, the match is extended one hole at a time until it is won. However, the Committee in charge of the competition may decide that a match will end in a tie rather than be extended. We see this happen in competitions like the Walker Cup and the Curtis Cup.

One of the things that players may do in match pay is concede a stroke, hole, or even a match! In order to concede a stroke, the player must clearly communicate to his or her opponent that this is the intent. A player can do this verbally or with an action that clearly indicates the intention to concede. You often hear phrases like, “that’s good,” or “you can pick that up,” to verbally indicate a concession, or you may see an opponent simply pick up the player’s ball.

· Conceding a stroke: A player may concede a stroke to his or her opponent any time before the opponent’s next stroke is made. When a stroke is conceded, the opponent has completed the hole with a score that includes the conceded stroke.

· Conceding a hole: When a player wishes to concede a hole, the player may do so any time before play of the hole is completed, including before the players start the hole. Players may do this for many different reasons; I once conceded a hole simply because I knew that the hole was always difficult for me and that playing poorly would negatively impact me for the rest of the round. In that match, I conceded the hole before playing it and moved on to the next hole with my confidence still intact!

· Conceding a match: If a player wishes to concede a match, they may do so any time before the result of the match is decided. This may even be done before the match begins, such as when one player knows that he or she will not be able to compete on a given day.

It is important to be thoughtful when conceding a stroke, hole, or match, because once a concession has been made, that concession is final and irreversible.

In match play, knowing the status of the match is essential for players as they make decisions about their play during the round. Therefore, players have a few rights and responsibilities in match play that they do not in stroke play.

First, when asked, a player must tell the opponent the correct number of strokes that he or she has taken during the hole. If a player tells his or her opponent the wrong number of strokes or fails to answer the request, and the player does not to correct the mistake in time (which generally must be before the opponent makes another stroke or makes a concession), the player loses the hole. Second, a player must inform the opponent when the player incurs a penalty, unless the opponent is otherwise aware of the penalty (such as when they obviously watch a player take relief from a penalty area). If the player does not inform the opponent in time, the player gets the general penalty, which is loss of hole in match play. Third, players are responsible for knowing how the match stands. If the players mistakenly agree on the match score, they may correct the mistake before either player makes a stroke to begin another hole, or if this happens after the last hole of the match, they must correct before the result is final. However, if the players do not correct the mistake in time, the agreed upon score becomes the match score.

Finally, during a match, players are responsible for protecting their own rights and interests. As such, if a player knows the opponent broke a Rule, the player may act on that knowledge or choose to ignore the breach. However, the player and the opponent may not deliberately agree to ignore a penalty or a breach – that is, if both the player and opponent know that a Rule was breached, they cannot decide together to overlook it. If players disagree on whether a Rule has been breached, they may request a timely ruling from a referee or the Committee.

Additionally, players may decide how to proceed by agreement in match play when they are unsure of a Rule. For example, if player A wishes to take lateral relief from a red penalty area and isn’t sure how big the relief area should be, Player A and his opponent may agree that it should be three club-lengths, so long as neither of them knows that it is only supposed to be two-clubs lengths. In match play, players may not play two golf balls when unsure of how to proceed.

Match play allows players the freedom to protect their own rights and interests and to always know where they stand in their competition. It is a fun way to play a round with friends, or in a friendly competition.

Next time that you go out to play a casual round of golf, consider trying match play!